On 14 November 2016, the candidates of Mister Model International Pageant 2016 visited the Rohtak city in India to grace the Interzonal Youth Festival as the guest of honour for the event. The candidates were accompanied by the TIM Management Team, the parent organization of this prestigious international pageant, led by Mr Luis Trujillo and the Rubaru Group team, headed by Mr Sandeep Kumar, the host for the pageant in India.

This annual extravagant event took place at India’s one of the most prestigious universities named Maharshi Dayanand University. The event was organized by the Department of Students’ Welfare of Maharshi Dayanand University. The candidates received a very warm welcome from the people of Rohtak city and more than 4000 students and faculty members of the university. Several media correspondents and journalists were also present at the venue to cover this prominent event. The candidates were seen dancing to the Indian music and enjoying themselves.

This is for the first time that this prestigious international pageant for men is taking place in India. The finale of the pageant will take place on 20 November 2016 in the world’s largest democracy, India.

Here are the pictures of the candidates during the Interzonal Youth Festival took place at the Maharshi Dayanand University, Rohtak. 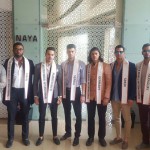 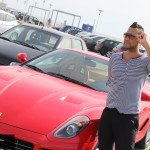