Kunal Arora, who was elected Rubaru Mister India Tourism World 2017 at the grand finale of Rubaru Mister India 2017 contest is all set to represent India at the Mister Tourism World 2017 contest to take place in Myanmar. The grand finale of this well-established international male pageant will take place on December 21, 2017 at the Yangon Theatre in Myanmar. The motto of this well-established international male pageant is “Charmingly Cultured”. The pageant emphasises of promoting unity and friendship; fashion, tourism, biodiversity and humanitarian causes across the globe. The reigning Mister Tourism World is Okkar Min Maung of Myanmar. He won the title last year in the Philippines.

Kunal is 25 years old and is a freelance model. He stands 5 foot and 11 inches and has black hair and black eyes. He holds a Bachelor’s degree in Business Administration from the prestigious Indraprastha University and is currently working with the Interglobe Technologies in New Delhi. During the Rubaru Mister India 2017 pageant, Kunal grabbed attention for his very innocent and charming looks and fabulous speaking skills. This guy seems to have the gift of gab and knows how to hold a conversation. Surely, this quality adds more charm to his very magnetic personality.

The Rubaru Mister India contest is India’s foremost and oldest surviving annual male pageant. The pageant has been happening annually since its inception in the year 2004. It is organized by the Rubaru Group having headquarters in the North Indian state of Haryana. Over the years, the pageant has produced various national and international winners who have made India proud in various fields.

Soon, Kunal will be leaving for Myanmar to take part in Mister Tourism World 2017 contest that will take place from 10 December 2017 to 22 December 2017 in Myanmar. Models from all over the world will be coming to the beautiful country of Myanmar to take part in this international pageant for men. They will be judged on several parameters like communication skills, formal wear round, runway skills and many more. At the grand finale of the pageant on 21 December 2017, the best performing delegate will be proclaimed as the eventual winner.

Check out more pictures of this charming gentleman here. 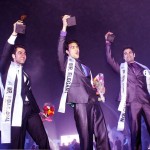