Sandeep is the first and only Indian pageant owner to receive Best Pageant Director award and that even multiple times. He won this prestigious award for the fourth time in last six years. Sandeep’s tryst with pageantry began in the year 2004, when he created Rubaru Group to organize fashion events in India. Rubaru Mr India pageant was launched under Rubaru Group in the year 2004, making it the longest running annual pageant for men in India. In India, the pageant, Rubaru Mr India awards maximum number of titles during it coronation night. This year 40 candidates competed at the sixteenth edition of the pageant and 12 titles were awarded at this event’s national finale ceremony to the top placers of the event. These award winners would now go on to represent India at some of the finest and most well-established international modelling competitions across the globe.

Rubaru Mr India is India’s biggest and most well-known annual pageant for men. Since the pageant’s inception in the year 2004, the pageant has sent India’s representatives to more than 15 international beauty pageants and modelling competitions for men. The pageant also holds the record of being associated to maximum of international pageant organizations in India. Some of the pageants it is associated with are Mister Global (based in Thailand), Mister Model International (based in USA), Mister Tourism (based in UK) and Mister Grand International (based in Brazil). In India, Rubaru Mr India pageant has produced maximum number of international award winners when it comes to male pageantry. This is one of the reasons that Sandeep received the name, “the czar of male pageantry in India”.

Rubaru Mr India pageant is often referred to as the “goldmine of handsome faces” in India because of the models and winners it produces. The pageant is famous for producing some of the best looking male models of Indian origin. Some very good-looking models and television celebrities like Mudit Malhotra, Prateek Baid, Akash Chaudhary, Pradeep Duhan, Debojit Bhattacharya, Zulfi Shaikh, Ashwani Neeraj and Rohit Jakhar have all started their journeys after winning the Rubaru Mr India pageant in past.

We, at Misterology would like to congratulate Sandeep Kumar for his wonderful achievement and wish him all the very best for his future ventures and collaborations. 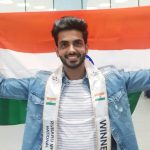 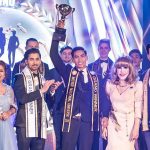