Ace Indian fashion photographer, Amit Khanna will be the official photographer for the inaugural edition of Mister Model Worldwide competition to take place from December 16, 2018 to December 23, 2018 in India. The competition is the first ever international male model search event based in South Asia. Models from different parts of the world will be travelling to India to take part in this week-long international fashion extravaganza. The closing ceremony of the event will take place on December 22, 2018 at City Park Resort in New Delhi, India.

Amit Khanna is a fashion photographer based in the entertainment capital of India and alpha world city, Mumbai. He is often cited as one of the best photographers ever to join the Indian fashion fraternity. Apart from being a photographer, this very talented Indian gentleman is also a scriptwriter, director and actor. He has written and directed various award winning short films, web series and television series that include popular names like Channel V’s Roomies, Positive, All About Section 377 and An Untold Story of Paperboats. His short film, An Untold Story of Paperboats was screened at the Cannes Film Festival and won The Best Film in Foreign Language Award at the NICE International Film Festival held in France.

Khanna is also the recipient of Dada Saheb Phalke Excellence Award and is the first Indian fashion photographer to receive this prestigious honour. His web series All About Section 377 depicting the life and struggle for LGBTQ community in India received positive reviews and became an instant success. Khanna also featured as the protagonist in the web series and his work was highly appreciated by the viewers. From being a student of Hotel Management at IHM (Indian Institute of Hotel Management) to becoming one of the top notch fashion photographers in India, Amit Khanna’s journey to stardom has been no less than a rollercoaster ride. He has been part of various Indian fashion events that include prestigious shows like India International Jewellery Week, Wills India Fashion Week and Lakme Fashion Week to name a few. This very versatile individual has don many hats – scriptwriter, photographer, director and actor and has excelled in every field that we entered.

Soon, he will be flying to New Delhi to cover the inaugural edition of Mister Model Worldwide pageant. Amit will cover all the events of the competition starting right from the Opening ceremony to the grand finale of the event. This international fashion event will commence on December 16, 2018 with the arrival of models from different parts of the world to New Delhi. They will take part in various preliminary events and activities that will help in the election of the winner of the competition.

The Mister Model Worldwide competition is owned by Rubaru Group, a pageant organization and NGO based in the Indian state of Haryana. Rubaru Group is one of the most well-established pageant organizations in Asia. It is the producer of five (5) beauty pageants and modelling competitions that include Rubaru Mister India, Rubaru Miss India Elite, Rubaru Mr & Miss Junior India, Miss Supermodel Worldwide and Mister Model Worldwide. Over the years, the Rubaru Group has produced various winners and titleholder who have brought laurels and pride to the world’s largest democracy, India. 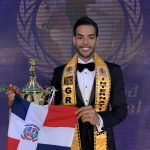