The contest commenced on December 16, 2018 with the arrival of models from different parts of the world at the national capital city of New Delhi. The candidates took part in a series of photo shoots and preliminary events during this week-long international fashion festival. They were judged on various parameters like confidence, runway skills, on-stage presentation etc. Prior to the finale of the event, various sub-competitions were also held that included National Costume Presentation, Physique and Fitness round and Formal Wear sub-competition. These three pre-coronation events focused on the superficial qualities of the candidates. Apart from these 3 main segments, there were 2 other major sub-competitions in the contest that focused on individual personalities and talents of the candidates. There was a special segment of Talent round where the participating candidates showcased their talent followed by individual interviews of the candidates. All these events helped in the election of the contest’s winner.

Carlo hails from Laoag City in the Philippines and is a model, actor and fitness consultant by profession. He is 22 years old and stands 5 feet and 11 inches tall. This very charming gentleman from the Philippines holds a degree in information technology. At Mister Model Worldwide contest, he got attention for his very magnificent and charming face and his perfectly sculpted physique. Apart from his superficial qualities, it was his confidence and very well-spoken, disciplined and humble personality that was highly appreciated by everyone. Other than winning the title and the Best Fashion Model award, Carlo was also one of the top 5 finalists of the talent competition of the event. He delivered a very astounding dance performance which left everyone awestruck.  Indeed, Carlo is a quintessential embodiment of great looks and an appealing personality. He is the perfect representation of a 21st century gentleman who is confident, well-spoken, humble, sophisticated, talented and possesses a very dynamic and versatile personality. He embodies all the attributes of an ideal man and he is just too perfect in every way.

Carlo won various prizes and will spend next 1 year working for causes supported by the Rubaru Group. He will also several social and fashion events. 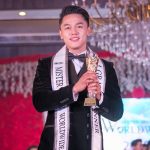 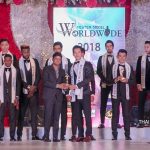